In the early 1970s Pearce was captivated by the beauty and luminosity of Georgian glass, and devoted himself to revitalizing the ancient craft of glassblowing for contemporary taste.

The book opens with an account of Pearce’s youth in rural Ireland, which had a profound effect on his creative spirit, and his pivotal move to create an innovative workshop in Vermont. Showcased throughout the book are his iconic designs, photographed individually as well as in inspiring tablesettings and as vignettes. Profiles of the work of potters, glassmakers, and artisans that he collects and turns to for inspiration are also featured.

Skip to the end of the images gallery 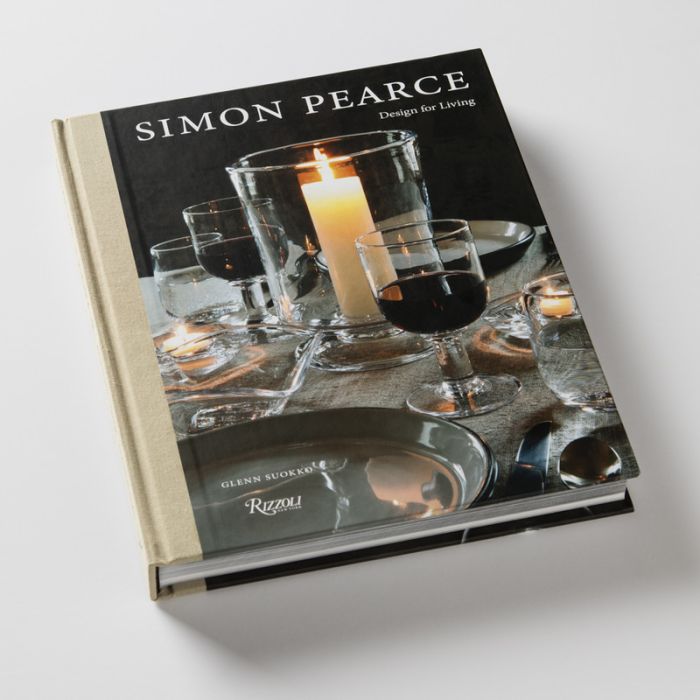 Skip to the beginning of the images gallery
Details

Design for Living presents over four decades of the work of the legendary glassmaker Simon Pearce.
By Glenn Suokko
Foreword by Simon Pearce
Contribution by Margaret Downes

About the author:
Glenn Suokko
Glenn Suokko is an independent book designer and photographer. For over twenty-five years he has designed and produced books for art museums, foundations, and publishers in the United States and Asia. From 2005 to 2012, he created Pastoral, a series of biannual publications that feature profiles on creative individuals and organizations in Vermont. In 2009, he coauthored with Pia and Simon Pearce the book A Way of Living. From 2009 to 2013, he was an independent art director, writer, photographer, and creative director for Simon Pearce.

About the Contributors:
Simon Pearce
Foreword writer Simon Pearce started his early creative life as a potter, working in his family’s Shanagarry Pottery in County Cork, on the southeastern coast of Ireland. He trained as a glassblower at Glasfabriek Leerdam in the Netherlands, Venini glassworks in Italy, and Orrefors in Sweden. Simon established his glass business in Bennettsbridge, Ireland, in the mid-1970s. He moved to America in 1981, settling in Vermont, to pursue his dream of creating handcrafted utilitarian glass using old-world techniques and the finest raw materials. He and his wife, Pia (McDonnell) Pearce, created Simon Pearce Glass. For nearly forty years, Simon Pearce’s glass has been famous for its range of styles, pure materials, and luminosity.

Margaret Downes
Contributing writer Margaret Downes was one of the first women to become a partner in the international professional services firm PricewaterhouseCoopers (PwC) and the only woman to date to be elected president of the Institute of Chartered Accountants in Ireland. She was deputy governor of the Bank of Ireland. Her interest in the visual and performing arts and business acumen led to her to be chair of the Kilkenny Design Workshops, a non-executive director of Terence Conran International design empire, chair of the Emerging Irish Artists Residency competition, and chair of the Dublin International Piano Competition.